This page follows the story of upright pianos on from Victorian Cottage Pianos.

In this diagram of our time-line, the pianos marked in red are the direct descendants of the very tall Georgian uprights such as Cabinet pianos.  Starting at the bottom of the diagram, they progress clockwise from the 1840s right through to the 1880s, and then these instruments shown on our Victorian page, with their bichord stringing, London Legs and Sticker Actions, just grind to a halt and are no longer made.  The pianos marked in green progress alongside the others, but are a quite separate branch of the evolutionary tree of upright pianos, which endured beyond the 1890s and evolved into the modern upright piano.

Rather than waste screen space, I have turned this diagram on its side…

Robert Wornum was one of many makers using sticker actions in tall cabinet pianos, but in 1826, he invented a very different, smaller action which allowed him to produce a much smaller upright piano which he called “Piccolo Piano Forte”, but it wasn’t just smaller, Wornum had invented a different type of action, with particular emphasis on correcting a particular problem:  Unfortunately, some of the modern, coloured, computer-drawn Wornum actions online are not correct.  In the Sticker Action, the hammer strikes the string, then bounces off, but sometimes it will bounce back to strike the strings several times, so instead of a single, clear note, it may produce an effect known as “bubbling”.  It’s onomatopoeia, and if you sing “bubbling” on one note, you imitate the effect.  To fix this, Wornum used a device called a CHECK on each note, to catch the hammer after it strikes the strings, and stop the bubbling.  Cristofori had used checks right from the time of his invention of the piano.

At the time, other London makers did not want to know about Wornum’s action, and stuck to their old sticker actions.  However, the French makers (who had only recently begun making uprights) soon created their own version of Wornum’s 1826 action, which became known as the “French Action”, and they called their instruments PIANINO.  Many had trichords in the treble – 3 strings per note, and sensible brass pedal feet.  The term “pianino” has been used at other times to mean a small piano, or sometimes just a piano smaller than a grand, as it was in Germany. 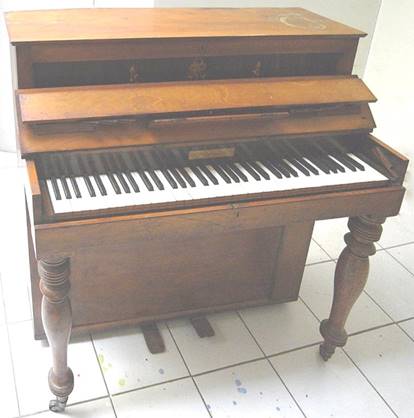 By 1842, when our Wornum Piccolo Pianoforte was made, these French versions were having such an impact on the British market that London makers were finding it increasingly difficult to compete with this enemy of the sticker action, so in addition to their cottage pianos, they soon began making some French-style pianinos, or importing French-made ones.  In the 1880s, the Cottage Pianos, with their London Legs and Sticker Actions, suddenly died out, and were quickly replaced by developments of the Pianino, and no credit was given to Wornum, although the phrase “Check Action” would sometimes be seen.

These pictures are typical examples of the fairly small French uprights known as Pianinos, which were already known by 1847, when Chopin died.  The style was common between the 1840s and 1890s, so it is very difficult to pin down a date by their appearance.  They were usually plainer and smaller than Cottage Pianos, with columns and toe-blocks replacing the legs, but with the pierced fretwork replaced by a solid boxed-in front.  Later, in imitating the French Pianino, Broadwood and others also used the Wornum-style action.  Also, whereas cottage pianos favour a one-piece FULL TOP, the top of a Pianino is usually a HALF-TOP hinged onto the back half.  When the music desk is folded out, it holds the top open slightly, to let more sound out. 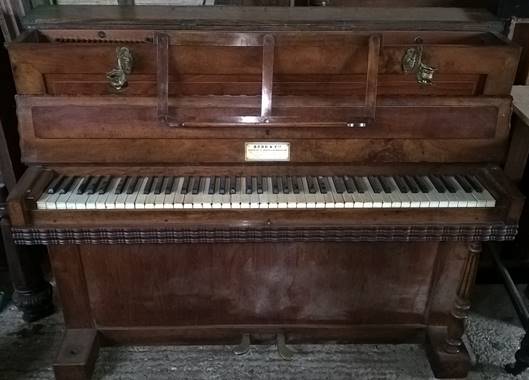 This is our Rudd & Cie pianino, (kindly donated by Maria Black) thought to have been made around 1854.  Most pianinos are quite crude and box-like, but the fancy carved edges on this one do so much to make it more attractive.  Rudd was a London maker who moved to Paris and worked with Debain.  There is some suggestion that this little-known London piano maker even may have initiated piano making in what was originally a famous organ firm, originators of the Harmonium.  Rudd may have worked in Paris as early as 1837, but Debain was already producing pianos in 1830, and seems to have become associated with Rudd in the 1850s.

In the 1860s, Chappell, Boosey, Cramer and Geary were all producing similar instruments in the style of the pianino, Cramer and Chappell called them PIANETTE, Boosey called his a MINIATURE PIANOFORTE.  The twenty-guinea Chappell Pianette on your left was awarded a medal at the 1865 Dublin Exhibition, the one on your right (owned by Bill White) may be a little later, but it is very similar.  At the time, Chappell does not seem to have had a piano factory, so it is possible that these instruments were imported from France.  We struggled to find historical records when we were in Paris.

BROADWOODS IN THE STYLE OF A PIANINO

The Broadwood cottage piano on your left is from 1871, scrapped because it didn’t sell at auction, and I wasn’t quick enough to rescue it.  The next is John Ruskin’s 1871 cottage piano, which we visited in his former home at Brantwood in the Lake District, and it owes its survival to the fame of its owner.  The 1871 pianino-style instrument (kindly donated by Julian Silverton) is in our own Piano History Centre but the French makers sometimes did a better job of the decorative work, whereas this is a very functional box that does not do justice to the quality of workmanship inside.  The 1872 example (kindly donated by Nick Wilson) has the pierced fretwork associated with cottage pianos, but instead of the usual legs or columns, it has trusses, a feature more commonly found on Edwardian pianos. The 1883 one is similar, but with fretwork, and there is an 1869 example like this one in the Victoria & Albert Museum.

I inspected a similar example in Ipswich, and one was offered on Ebay for 99p. 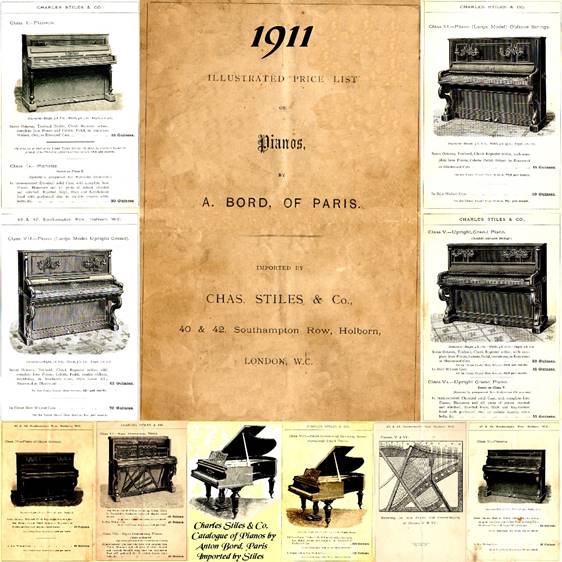 The story of upright pianos continues on our EDWARDIAN page.